Spraying will start later this month to combat Oak Processionary Moths, which were first found on trees in several of Bexley’s highways, parks and open spaces in 2018.

The Forestry Commission is paying ‘Bartletts Tree Experts’ to carry out a two-phased spraying of trees in the borough that are infested by the caterpillars at locations identified by the Forestry Commission. The first treatment will start at the end of April and is expected to take 2–4 weeks, while the second phase will start two weeks after the completion of the first. The spraying teams will work Monday to Saturday in single 12-hour shifts: 07:00–19:00. They will put signs up around the areas where they are working.

Throughout April the Council’s Tree Officers will be inspecting oak trees across the Borough. If the insect is discovered during the treatment period, any new locations will be added to the programme.

The Council will be employing specialists to remove any nests that are found after the spray has taken place.

The Moth is a non-native insect, originally discovered in London 12 years ago. It has spread outwards and has been found in the neighbouring boroughs of Bromley and Greenwich for several years. Its caterpillars primarily live and feed on Oak leaves, but they can also be found on the ground around infected trees.

While the adult moths are harmless, the hairs of their caterpillars contain a strong irritant. Contact with these hairs can cause severe irritation, with skin rashes and, less commonly, sore throats, breathing difficulties and eye problems.

Both people and animals can be affected by touching the caterpillars, their nests, or if windblown hairs make contact with the skin. The greatest risk period is between May and July, but the hairs from the caterpillar can be present on old nests, and could be blown or touched at any time of year.

Please consult your pharmacist, GP, NHS Direct or Vet respectively if you or your animal are exposed and suffer an allergic reaction to the hairs of this caterpillar.

Further information is available on the Council’s website at https://www.bexley.gov.uk/…/oak-processionary-moth-opm-iden 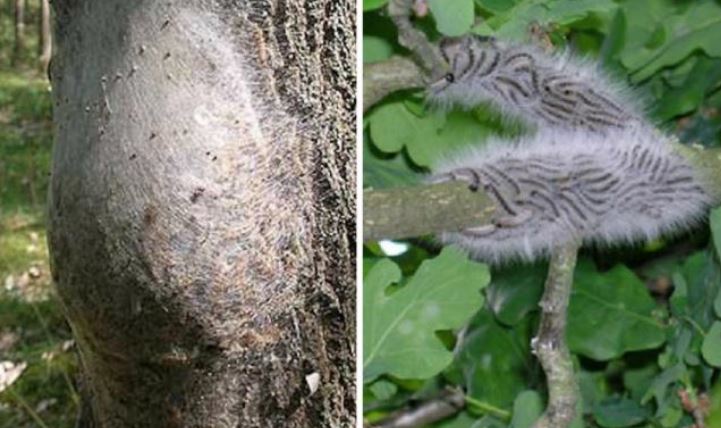